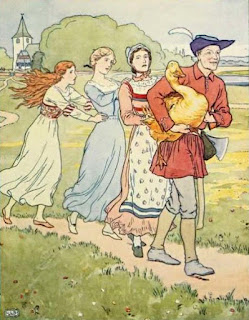 In the Golden Goose, the goose was selfless and tried to do a good thing for the poor mother and daughter but the greediness of the mother drove the goose away and gave them a poor future.
The goose feathers were made of gold, as the goose was going by it saw a mother her daughter suffering because they were poor. Seeing them made the goose sad so he thought of a great idea to help the poor family, he would give them one of his feathers so they could sell them and in return get money and would no longer suffer from economical problems. The goose would only give them one feather ever so often. The family never suffered from money again when the goose saw they were going to need money again it would come back and give them another feather. Then one day the mother got greedy and planned to capture the goose and take off all of its feathers away. However, what the mother did not know was that the goose's feathers would change color and become worthless if its feathers were taken against its will. The mother took all of it feathers but they became worthless, the goose was able to grow its feathers again and escaped and never came back. The mother's greediness ruined it for them as they went back to being poor.

Popular posts from this blog

Introduction to a Science,Travel and Hiking enthusiast!

January 16, 2020
Hello everyone!!
My name is Monica Avila, I was born in Guanajuato, Mexico and moved to the U.S. when I was five, I can speak Spanish, English and a little bit of Portuguese (currently learning). I am a senior here at OU (Wow can't believe I'm saying senior time flies by so fast). I am a Health and Exercise Science major. I'll be graduating this spring, my plans so far are to take a year off and work and travel a little maybe go for masters in health promotion but I'm still not sure yet. In the future, I hope to go to grad school for physical therapy and work with either the elderly or children. I love science and learning about the human body. The way the human body works and manages to keep us alive is so amazing, learning all the mechanics of it is one of my favorite parts of my major. Therefore, some of my favorite classes have been Human Anatomy and Exercise Physiology.


Outside of my major, I also love learning about different places and cultures and I think that…
28 comments
Read more

January 31, 2020
I stood there for a moment staring at my reflection, my whole body embellished in the finest clothes and jewels. I still couldn't believe it, today is the day. My body was filled with nerves and excitement all at once. Suddenly a large smile adorned my face as I remembered our first encounter and the events that came after...
After we successfully helped Vishvamitra win in the battle against the rakshasas, Lakshmana kept bothering me to accompany him in exploring the city. All I wanted to do was rest after the long day but after a lot of convincing I finally gave in. We were accompanied by a hermit and finally set out to explore the city of Mithila ruled by the great King Janaka. The city was beautiful and full of life and the smells from the marketplace filled our noses, we walked for a while and later made our way to  King Janaka's palace, where we would be staying.
We entered the large palace. As we were passing by, the garden caught my attention and I made my way to pick …
4 comments
Read more